Using Airtable To Capture the Outputs of Our Top 20 Brainstorms 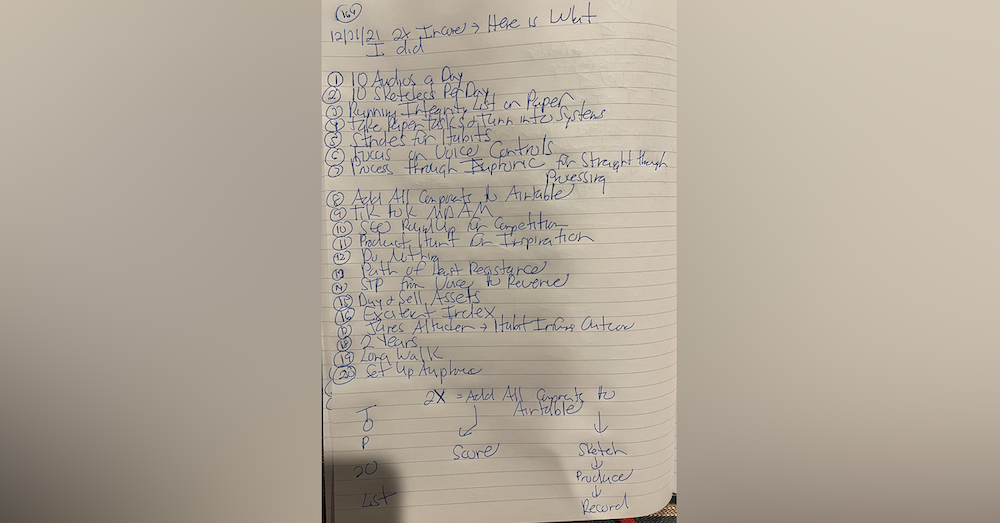 0:00
And here we go with January 1 2021. This is a recording first recording that I'm doing on off phonic and 2021. This is based on a top 20 list sketch that I just did. And I do top 20 lists to start tune some future pacing of, here's some of the stuff that we actually want to create. So I was like, double my income in 2021. Here is the stuff that we actually did. And I go and look at one of these things and start to start to create and build off of it. Okay, so first one is 10 audios a day.

And that is like, that's the big piece that is, that is where the brainstorming does. That's where we get a little bit more free. That's where we can start actually working out some of the material and the some of the stuff that we want to create 10 sketches to per day with a sketch does is a sketch makes a an audio, more structured and better to be able to work through. So when I do an audio based on a sketch, it's a lot easier for people to consume on the back end, running integrity list on paper, I think that's important integrity lists are things and commitments that we've got to do.

And if we don't do them, then integrity is going to be out and the feeling is not going to be we're not going to be as empowered with the work we do. Take paper task and turn into systems. So one if something is sitting on the paper too much, we turn that into a system someplace out there. strives for habits, I think it's important I've got the strides app in this like about 35 things that we go through each day.

Focus on voice controls, not minimizing the amount of times that we actually touch the keyboard. With the work we're doing and then processed through a phonic first straight through processing, I think this is important. Getting this audio message creating it off phonic, this will turn into the podcast on the back end. But it can just go straight through and go to all of our different places to be able to be able to work to be able to be able to, to work at all components to air table. This is the one actually when I close my eyes, I look into the future. That's the one that I was like at this is the one that's important.

This is the one that we want to to work through and to be able to create. I call it tic Tock MBA or go through tic toc and look at what other people are doing and start to implement some of the idea is the beautiful thing of Tick Tock compared to YouTube, his videos are at most one minute so you can get through a lot very quickly.

Seo roundup for competition that is just looking at if we're gonna be doing SEO stuff, looking at what other people are doing, who are ranking for some of the keywords gonna wait probably to be start to rank for some keywords actually now probably do some keyword research today to be able to work with it just to see what other people are doing it to do it just a little bit better. Go to Product Hunt for inspiration, those are products that are actually completed and out there into the market and things that people are working with do nothing always an option to do nothing and to allow other people other things to other ways to start to come in just path of least resistance.

So what I wanted to do with this was sit down and do a lot of typing. Instead, I just went and did a voiceover on the I said did a voiceover on the sketch and then turn into a podcast on STP from voice to revenue. So really seeing a path from Hey, I'm creating this thing right here, it's going to and then it's going to put people into I hate to use the word funnel, but you know, just you know, a path where revenue can actually get created. So I think that's an important one to actually work on. Just to see because now we can just do audio messages, and then they can go straight through to revenue.

And then yeah, just keep on pumping out more and more of those. Buy and Sell assets. I think that's an important one looking at web assets, buying improving and selling those up to see excitement index working on stuff that really excited about don't do things where there is not a lot of excitement around them and yet don't focus on on those things. I like the the James Archer basically did brainstorm to 10 brings, you know, items with 10 brainstorms every single day.

And actually, it's not even two years, we could focus on this forever until it actually you know, until it's something that that works and is is created, go on long walks, long walks, start to free up the mind and free up ways to be able to operate. So just a reminder and then set up off on it. That's what this is right here. Let me go to off on that right away.

So I look at what it's going to take two to x the income I was I got put things in air table, get them captured in air table so they exist in a structured way where there actually is some workflow in them. So thanks a lot for listening to this and have an amazing day.