Possibility of NFTs for Ideas 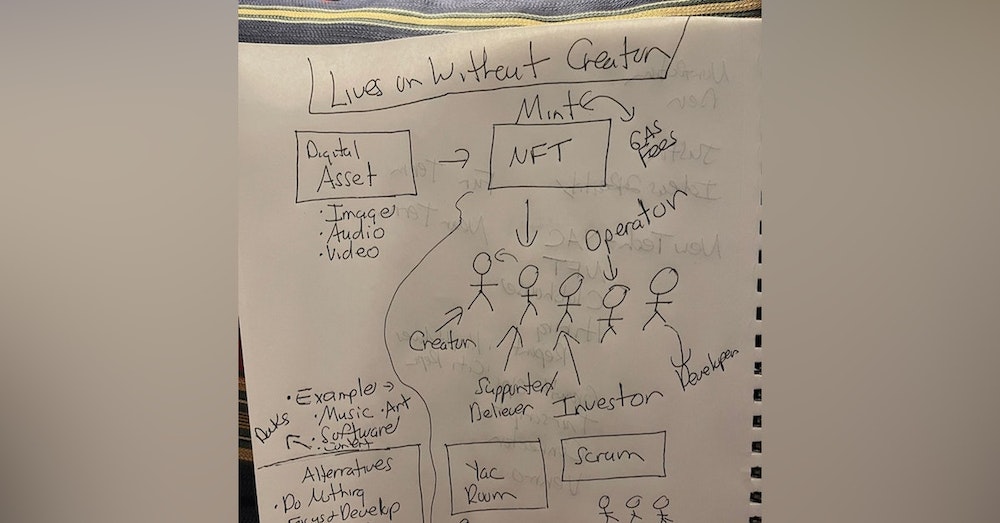 Please connect at Yac.com/JustinF if you would like to discuss more.

More details are at -

Justin Finkelstein 0:01
Hey, this is Justin, here's some thoughts around NFT's and potential interesting use cases for ideas really inspired by the five ideas...

Please connect at Yac.com/JustinF if you would like to discuss more.

More details are at -

Justin Finkelstein 0:01
Hey, this is Justin, here's some thoughts around NFT's and potential interesting use cases for ideas really inspired by the five ideas a day team and the work that's happening over there, obviously, probably community is a better way to tell us that.

So NFT's basically, a digital asset, can be an image and audio, video, it can be text with me, you know, image of text is typically how it would work and what you did take that item, and you meant it. And that's what makes it into an NFT. So what it does, you know, it puts it on the blockchain. And this is a pretty maybe naive and ignorant explanation puts on the blockchain, there is some fees to withdraw, you know, gas fees to to get that set up.

But now you're creating a contract. So as far as ideas, right, ideas really aren't worth that much. At the beginning, they're just potentials, they're seeds. Now, when you do that, you have the opportunity to be able to share them with different people. So let's just say you allow 10, you know, 10 people to own this digital asset, you are the creator. So we're now what you're starting to do is you're starting to introduce people, and you're the Creator, right, you're the person, there might be somebody who wants to get involved who's a supporter, believe that person who believes in you might not necessarily be interested in this idea or this project.

But look, they want to invest in the potential upside, they're saying, I believe I'm gonna vote for this one, the other person is the investor, the person just wants to, you know, make money on something they believe might be an appreciable asset, that's a beautiful thing about an idea, it's not worth a ton at the beginning, what matters is what you actually put into it, there's the operator's personal, like, Look, I'm just gonna roll up my sleeves and get this one done, you know, might be the developer, then each of those people they invest, right now you become, you know, it's probably not gonna go anywhere, if everybody just invest, although it is worth a little bit more, if people are willing to say, hey, it's a good idea a bunch of people are gonna make but it really doesn't get worth a ton until people start bringing in some other things.

So that's the whole idea, right? They think these things have a better chance of living. When you build a community that's vested, you know, behind it, so I gave the examples of, you know, traditionally, this is art, music, you know, software content. But, you know, this can be like an idea, like, as I said, here's a sketch with an audio on top of it, this could be an asset that somebody might be like, I want to do something with this or like, or I want to invest in it. And really look the alternatives just like do nothing and have them live on social media, which is great.

Another alternative was like focus and develop, put a team together focus develop, or you know, a smaller team, the issue with that is you're gonna have you have less people involved and less chance of success. Now, the beautiful thing about this is, when you when you do when you operate this way, there's a vested interest in increasing, right, it doesn't mean that everybody's voice matters as much, or everybody can start getting in the way.

So you get the benefits of, you know, multiple vested parties, but could still structure it where you know, the operation works the way that it works.

And sit down below here, like one of these is an experiment 1000 an empire right, some of these are gonna hit and become something. Now the other alternative that's out there right now is a rally that IO is created, you know, creator coin, which basically is an investment in a coin around creators, which is beautiful, like, let me just invest in the whole portfolio of this person effectively, or make a bet on the future of this person going on.

The issue with the creator coins right now they're on rally.io. The issue with those is, they're not available to you know, to to, to a wide group of people yet, they will be soon.

And then I would just say, you know, forget about the NFT just go to the creator coin, but for right now, it's the NF T's are the things that are available.

So hope this is helpful. If you reply back to this Yac anybody who's seeing this, you can be happy to have a conversation about it. I'm curious what anybody else is working on. Just use it as an excuse to share and exchange ideas with people like and respect so please feel free to reply back to as many ideas you have or any thoughts on what I share.