Being part of fixing broken systems 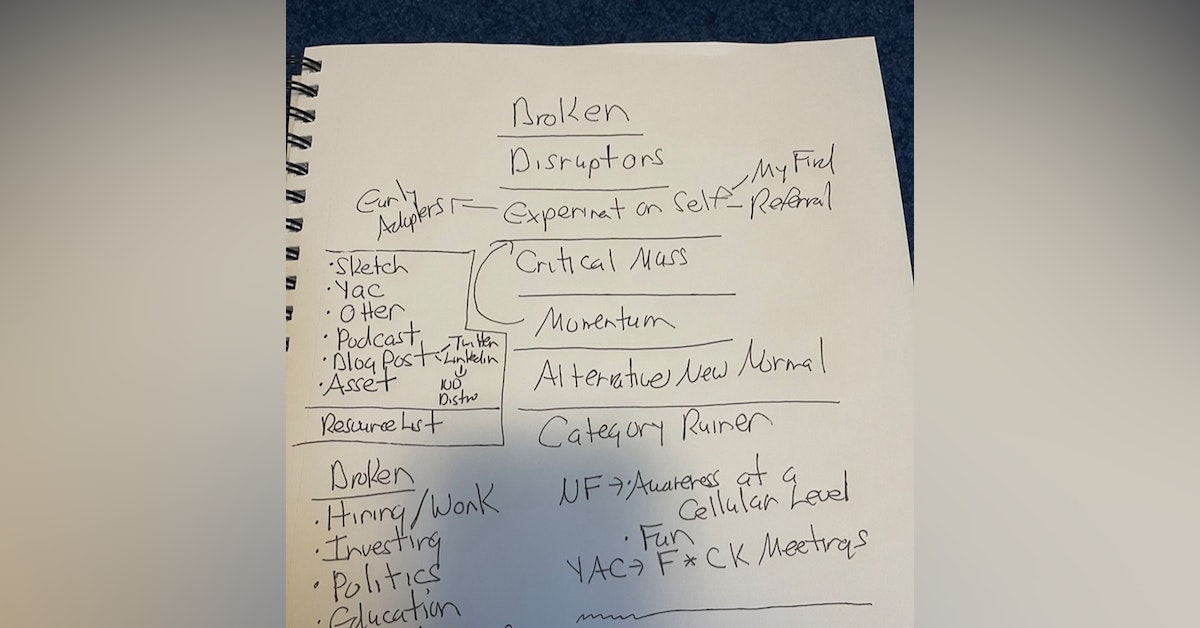 Unknown 0:01
Hey,
this is Justin, this very liberating for me for waking up in the morning and coming up with an idea and doing something about it and making it different each day. And I sort of want to systemize the...

Unknown 0:01
Hey,
this is Justin, this very liberating for me for waking up in the morning and coming up with an idea and doing something about it and making it different each day. And I sort of want to systemize the process for making that happen. And here's an attempt at actually doing that. So there's things I think about that are like fully broken, the one that's on my mind right now is the hiring process. I left my company unofficially end of September and officially end of December, and for a long period of time had an interest of going back and working into a company working with with another company. The problem is, or the challenge I faced was like the process for getting hired, you know, it could take like six months to eight months to really find the right position.

And maybe it takes less than that, if you put it in wouldn't be a pleasurable process, I'd be spending six months to eight months in my life, going through the hiring process to get a job that we don't even know what it's going to be when you actually get in there. Because no job is, is what it actually would actually is when you get there, that's not necessarily a bad thing. So the return on investment for going through some work, going through some jobs is going for jobs is a little bit challenging. So what I did is I started doing some consulting, and art and working with projects with people that I trusted, and that trusted me and I believed in the vision.

First company I've worked with and currently working with is nonfiction research, I believe in the thesis of the work that they do, I like the people that are involved with it. And that is something that's growing. I also looked for products that I couldn't necessarily do without, you know, to be able to work with and to potentially work with and then started having conversations with companies that are doing that that sort of work. The other thing from occurred, but but that doesn't that's like a middle a little bit of a unique position myself, because I do have the opportunity for some flexibility, but most people don't so great that I can solve a problem for myself creatively.

But now how do you start resolving problems? at a proper level? That's what I want to start working on. So from a recruiting perspective, the best thing that I have found right now is a tool. CEO, his name is Tim Connors. Think about that. Correct. And it's called use Perl. And we're connected on Twitter. And so yep, and I'll correct that. If that's wrong. And it's texting, right, you sign up for a text list text back to find out what you're looking for, and then makes a match, potentially now I signed up for we had a conversation again, the work that I do is pretty niche. So I haven't heard there's not I haven't heard anything back around it. But it's reduce the cognitive load, right? It's not like it's not a big headache to. It's not a big headache to be able to go through the process with them. So even though nothing has happened, I'm not wasting cycles and a ton of energy waiting. So I think that's a that's a positive disrupter in that right direction.

I also saw Justin Metro, the CEO of Yac, started something I think called secondhand hires, I'm doing this stuff from memory, I should have better references, but I'll share the references secondhand hires, which is great for people who don't get hired inside of a company. They can get referred to somebody else, right? They're not the exact fit or they want to do something but there's no match in the moment then. Then, yeah, they have, they can get referred out another interesting disrupter, right for that type of work.

So I've been thinking about like the cycles, right? Like there's things that are broken, or major pain points with people, there's tools that aim to disrupt what I do, as I experienced myself, I try them, then they gain some momentum. That's key. And I think that's where I like to bring a lot of people to these new things to start building the momentum, right. And then they grew a critical mass. And I think about like Yac in this place, right? yaks in a place where they've got momentum, they don't have critical mass, it's not common for people to think about meetings. And as you know, asynchronous audio right now, then they can become an alternative new normal, and they become a category ruiner. And I took Yac has been a category ruiner. For me, like it's ruined the ways of going back to a normal way of doing meetings.

Amazon is great as a category row in it, right? They're just like, they ruin the shopping experience. Like for a good you know, they ruin the shopping experience for doing it any other way. So I think that's one of the cycles that you go through. So I think it's important, at least for me, personally, to experiment, you've got to try a lot of things to find those things that that like this could potentially have legs and my experience personally is I get really excited about something I'm on day two of rally like I woke up this morning. It's like I can't get involved with I can't get I can't get involved. I get really excited about rally and I want to like check my portfolio and I want to see if there's other coins that can support.

I applied for a coin myself. So I'm really excited about them now. It will I'll know within two weeks or not. If my excite meant, maintained, it's nothing to do with them, right? It just has to do with me like if it maintains So, but most things don't even get to that excitement phase, right. But if they don't even get to that excitement phase, they probably don't even have a chance where it's like, not even seitan phase like we're at, like focus on it completely, but you want to use it over and over again. So I'm excited to share about this and pontificate. What I'm gonna do is I'm going to put this out, this is going to be a Yac or a Yac. Right now I'm going to translate into auto become a podcast, a little bit of a blog post.

And then I'm actually thinking about starting to tokenize these ideas to see, to start to take the temperature of people are actually interested in working in some of these things. I said a whole bunch of different things and just seeing what feedback they start to spark and then tomorrow, we'll either advance the kind of the ideas or what are the ideas that's in here, or we'll start new and now new probably won't be a completely set of different ideas, but it'll be a different cut on some of the similar ideas. So have an amazing day. And thanks so much.